UPS: On the road to decarbonisation with Eco-trucks

The ubiquitous brown UPS delivery van ensures critical last-mile delivery and is a common sight in towns and cities across the planet. However, the long-haul transport of packages and other shipments between UPS distribution centres requires larger truck combinations.

Since its establishment in Seattle, USA, 113 years ago, UPS has been developing and refining the most efficient, safe and sustainable methods of multimodal goods transport. The company operates a whole range of commercial vehicles to deliver more than 24 million packages around the world every day.

The complexity of the UPS road transport network requires a variety of different sized vehicles for the seamless delivery of packages to businesses and consumers. UPS has found that, for its operations in both the USA and Europe, the deployment of Eco-trucks is central to its ongoing mission to increase efficiency and reduce environmental impact.

UPS is therefore urging governments worldwide to support Eco-truck pilot projects, which are currently only permitted in 18 countries, with a view to further improving road transport systems.

In the USA, UPS operates a variety of single, double, and triple trailer configurations, including Eco-trucks. These longer vehicles are restricted to certain highway routes in 17 states, mostly in the western part of the country.

On these routes, UPS operates the most efficient and sustainable truck movements in its entire ground transport network. In 2020, UPS ran more than 36 million miles in Eco-trucks, with only 11 government-reportable accidents, thus achieving the lowest accident rate of any truck configuration in the UPS fleet.

In the EU, UPS has gradually increased the use of Eco-trucks. In 2006 and 2007, the company successfully participated in a trial in Germany’s North Rhine-Westphalia achieving a fuel consumption reduction of 21,700 litres over 70,000 kilometres. UPS has reduced its CO2 emissions on Eco-truck routes by 26% compared to transporting the same volume with regular trucks.

Today, UPS operates 31 Eco-trucks in Germany, 26 in the Nordic region and has begun deployment in Spain and the Netherlands. This means the company can move the same volume while driving 5.4 million fewer kilometres.

In short, Eco-trucks allow UPS to move more goods, with less fuel and lower emissions output, while achieving superior safety results. If Eco-trucks were permitted to operate in more EU member states and across internal EU borders, the advantages would be enormous. 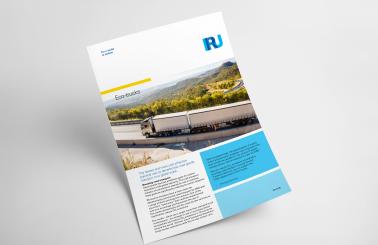 Driver shortages: navigating your way through

COP 27: Road transport committed to decarbonisation, but can’t do it alone