In 2022, IRU, backed with on-the-ground information from its members, continued to report and analyse global driver shortages: a chronic issue threatening the stability and continuity of mobility and supply chains. This article offers an overview of IRU’s efforts to analyse the situation, raise awareness and advance solutions.

For several years now, IRU has been publishing its global report on driver shortages.

In June 2022, after surveying more than 1,500 commercial road transport operators in 25 countries across the Americas, Asia and Europe, IRU released its 2022 Global Driver Shortage Report, which found that the sector is missing over 2.6 million professional drivers. 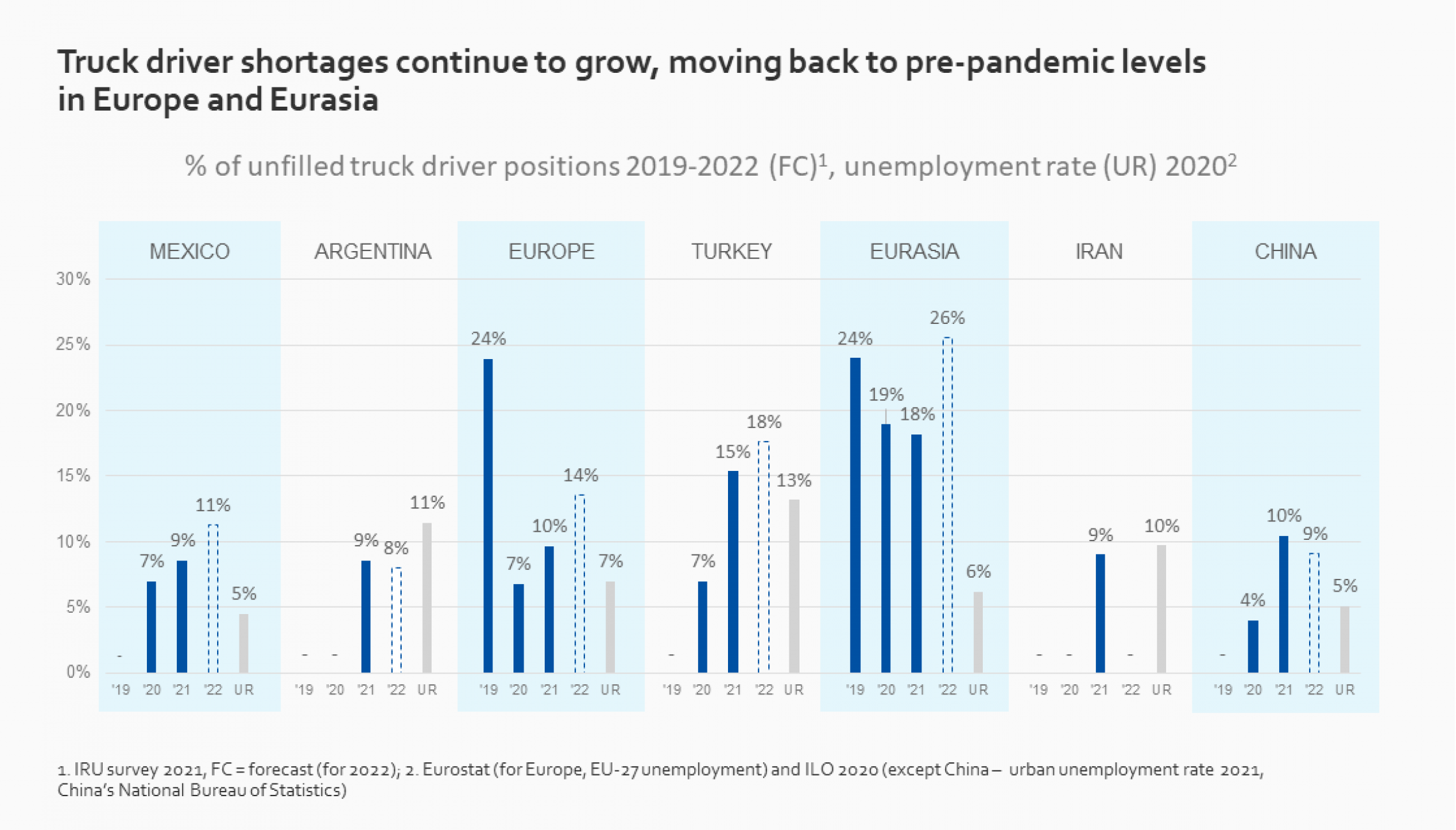 The report showed that women are still not in the driving seat. Less than 3% of truck drivers are women in all regions, with notable exceptions in China (5%) and the US (8%). The rate of female bus and coach drivers in Europe is better at 12%. However, these rates are all still well below transport sector norms, especially in Europe (with the notable exception of the Netherlands) and the US, respectivelly, where 22% and 28% of all transport workers are women.

There is also a demographic timebomb. Young drivers under 25 remain a small minority, at 6 or 7% of the truck driver population, in most regions. On the other hand, there are between two and five times more older drivers over 55 in all regions, except in China and Mexico. In the US and Europe, older drivers make up around one third of the workforce. Europe has the highest average driver age at 47.

The widening age gap is more serious for passenger transport. In Europe, only 3% of bus and coach drivers are under 25, half the rate of the overall transport sector. Drivers over 55 constitute 32% of the workforce, with an average driver age of 50.

Following the release of the global report, IRU made 22 member-exclusive reports available on its Intelligence Platform in August, providing data-based analysis on driver shortages in 19 countries.

Each report includes overall indicators on driver shortages and a breakdown of three demographic trends: age distribution, gender representation and the share of foreign drivers.

With the support of IRU members, the briefings also offer a contextual analysis of the results and an overview of the challenges and solutions in each country. 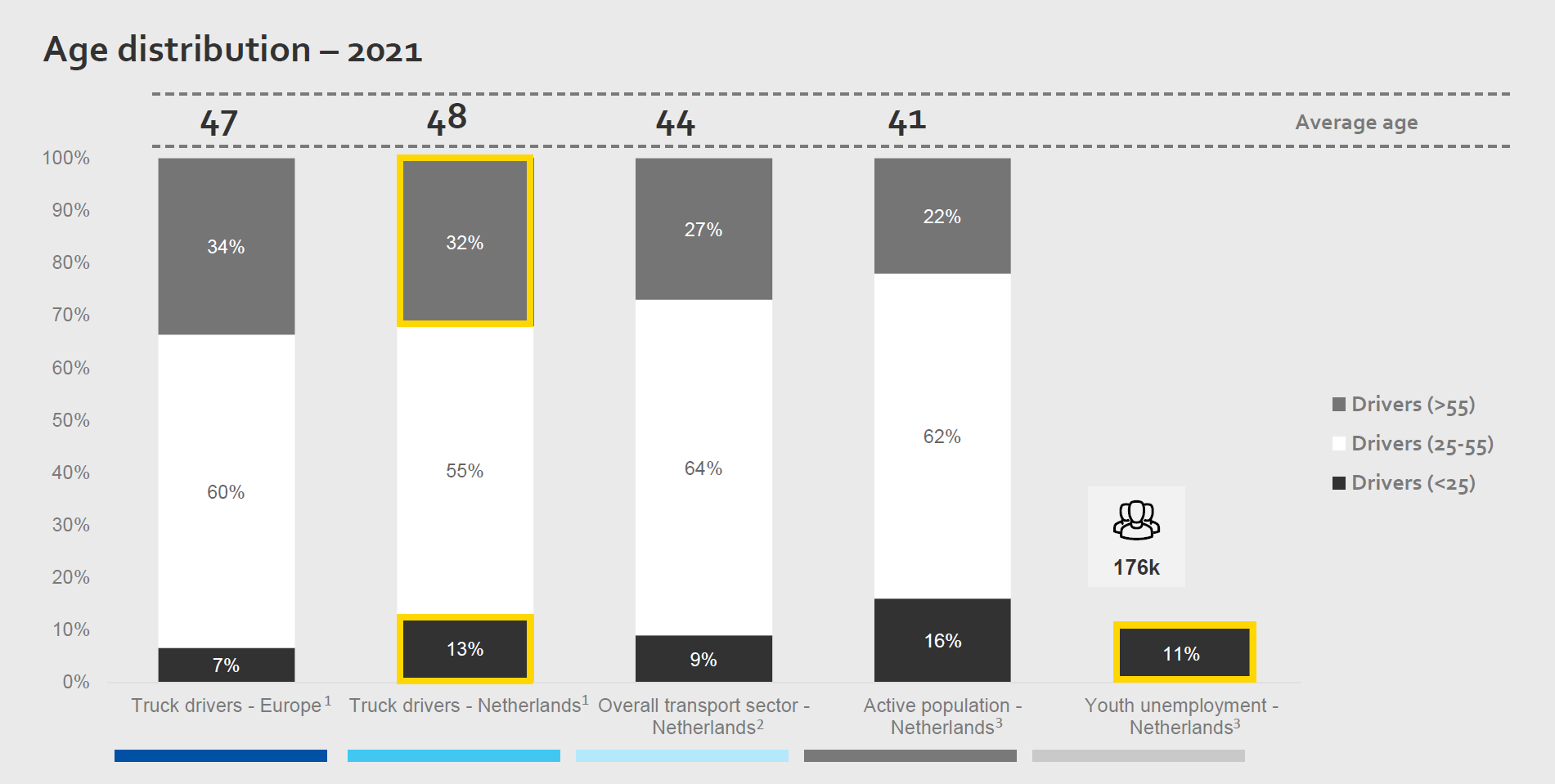 A few weeks later, IRU also released its detailed European report on commercial driver shortages. The report, based on a comprehensive survey of 744 road transport operators across 15 European countries, includes post-COVID economic indicators for the sector, detailed figures on demographic and gender dynamics, and the main causes behind the shortages.

In October, IRU’s EU Dinner Dialogue in the European Parliament brought together the road transport sector and public authorities to explore solutions to driver shortages. In particular, the focus was on how to remove barriers to entry for young people, improve working conditions, and mobilise automation as an opportunity to enhance the industry’s image.

Speaking at the event, Raluca Marian, IRU’s Director of EU Advocacy, said, “The EU will have around 500,000 vacant driver positions by the end of the year. A truly wasted opportunity given the 14.5% youth unemployment rate.

“It’s encouraging to see how seriously the sector is pursuing solutions to driver shortages, as well as the support from European parliamentarians and EU authorities. But the urgency of the situation is clear. We cannot continue down this path; it will lead us down a very dark road,” added Raluca Marian. 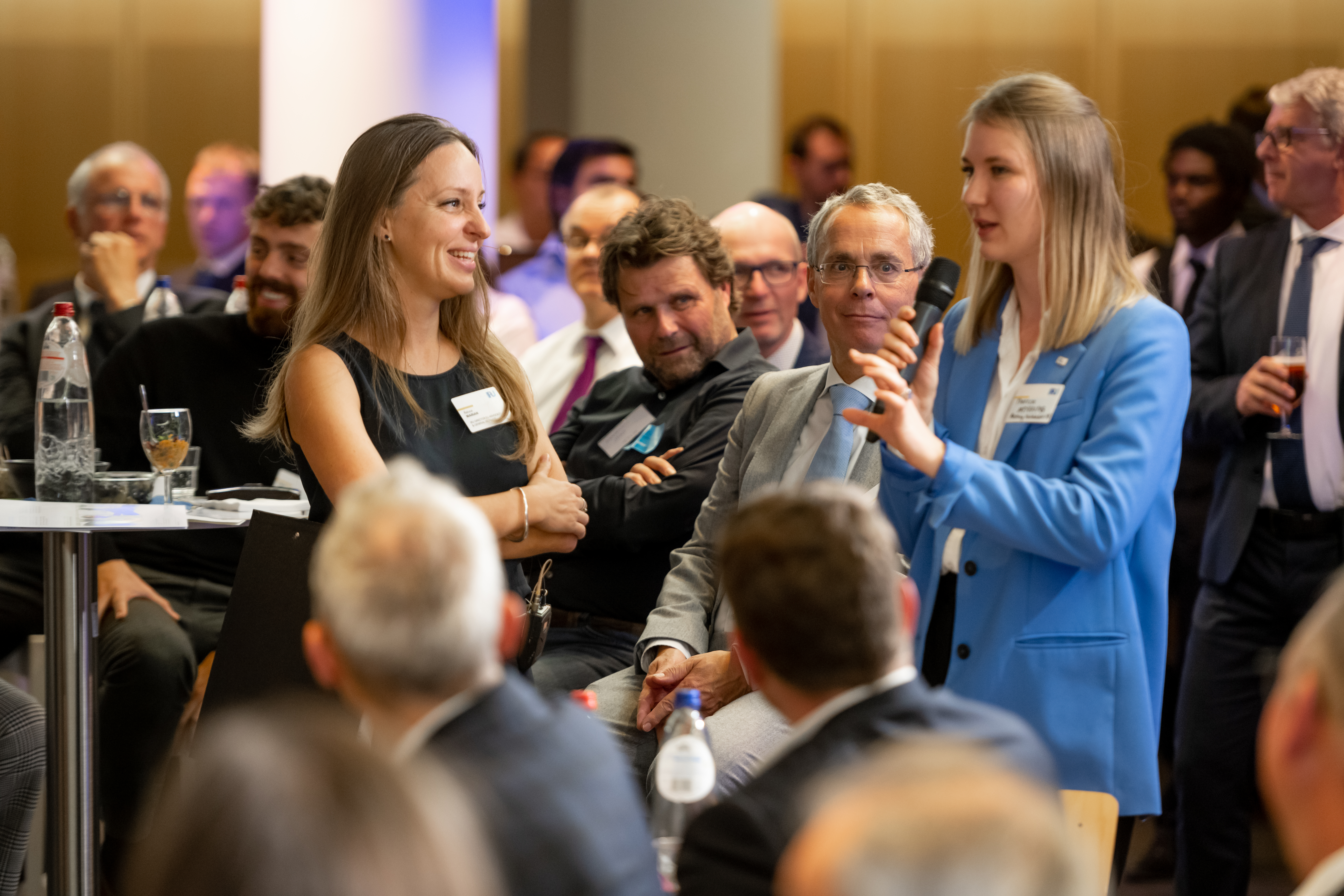 The dialogue was supported by the Czech Presidency of the Council of the European Union, and hosted by four members of the European Parliament: Petar Vitanov (TRAN), Dragos Pislaru (EMPL), Maria Walsh (EMPL), and Andor Deli (BUDG & TRAN). The Director-General of DG MOVE, Henrik Hololei, and Stanislav Dvorak, Director of the Czech Driver Affairs Department, also gave keynote speeches.

In addition to over 20 interventions by representatives and shippers from the sector, several young drivers, alongside experienced ones, shared their experience and how they think the sector could attract new talent. 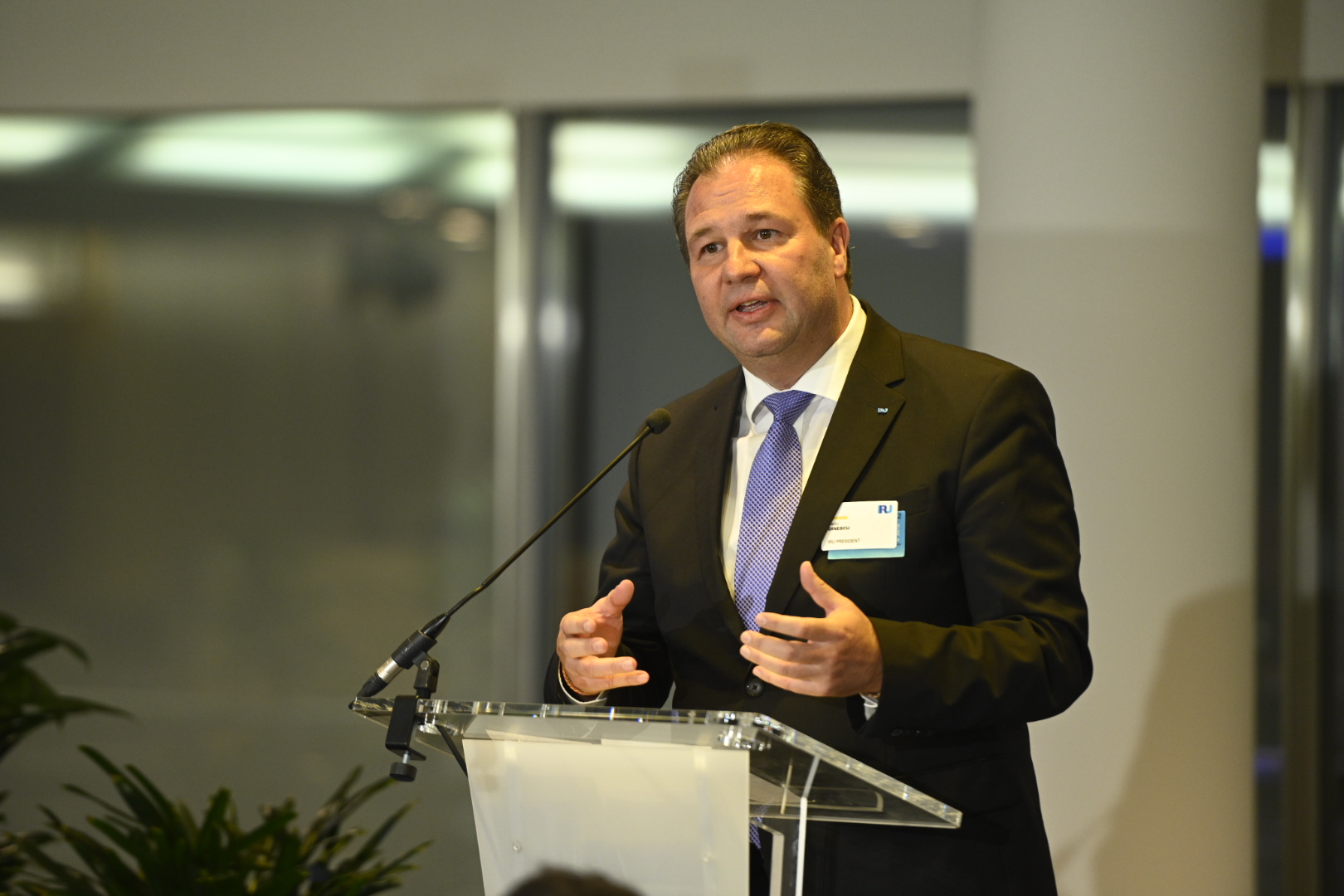 IRU President Radu Dinescu had a simple message in his concluding remarks, “There’s a good understanding of the challenges and possible solutions. It’s now time for us to act and get young drivers behind the wheel.”

In addition to the global driver shortage report, IRU released its first report on the attractiveness and accessibility of the profession in November.

Without action to make the driver profession more accessible and attractive, Europe could lack over two million drivers by 2026, impacting half of all freight movements and millions of passenger journeys.

Despite driver salaries being in some cases up to five times higher than average minimum wages, the report outlines alarming data on difficulties in accessing the driver profession, particularly for young people, and its attractiveness, especially for women.

The minimum qualification age is still 21 for truck drivers in five EU countries and between 21 and 24 for most bus and coach driver roles across the EU (see below), a huge barrier for school leavers.

Security, particularly for women drivers, is crucial to make the profession more attractive, with 95% of truck drivers and 94% of transport companies putting it as their top priority. Yet only 3% of existing EU truck parking places are certified as safe and secure.

“Without drivers, Europe’s economy, social mobility and climate plan will grind to a halt. But there are proven solutions, especially if industry and government work together,” said Umberto de Pretto following the release of the report.

The full reports (passenger and goods) are available to IRU members on the Intelligence Platform.

The full recording of the webinar is available here. Here’s a short snippet:

IRU Strategic Marketing Intelligence Senior Manager Marie-Anne Cervoni set the scene with the first presentation. “425,000: that’s the number of unfilled truck driver jobs in Europe. Just since January of this year, we have observed a 44% increase in demand for truck drivers.”

Amélie Achard, European Studies Officer at the Comité National Routier, who provided an overview of her organisation’s research on the sector in Europe, including a comparison of driver remunerations between Eastern and Western European countries, said, “We can see that there is still a high difference in remuneration between drivers working in Eastern and Western European countries."

“In conclusion, there is still an important difference between east and west despite the rise of driver gross salaries in eastern countries. We still don’t see real harmonisation at the European level,” added Amélie Achard.

ASTIC CEO Ramón Valdivia, who offered an overview of driver shortages in Spain, including solutions and the political environment, said, “72% of drivers in Spain are 50 or older. If the speed of onboarding new drivers does not change radically in the next five years, we risk losing more than one third of our truck driving workforce.”

“In my opinion, the sad reality is that nobody wanted to pay attention to the warnings put out by the industry. When we were heard, the actions taken were limited to theoretical studies of the phenomenon, without ever giving place to any consistent, lasting and economically sustainable plan,” he added.

Roxana Ilie, Manager of Representation and Information at UNTRR, who provided an overview of UNTRR’s efforts to address diver shortages, said, “The driver shortage has increased significantly in Romania, going from 49,000 in 2019 to 71,000 in 2022.”

“Looking at the main challenges that have led to this situation, minimum driving age remains a barrier preventing young people from entering the profession. It’s still 21 for truck drivers, while in the case of bus drivers, it’s 24,” added Roxana Ilie.

Freightsafe CEO Charles Anderson gave the final presentation, addressing a major issue limiting the attractiveness of the profession: the lack of safe and secure parking spaces.

“Truck drivers are forced, either by law or human limitation, to stop driving and take breaks after a certain period of time. This means that at least 50% of drivers’ interaction in this industry is when they are stationary. We saw this as a fantastic opportunity to better engage with drivers and started looking into why there is such a huge lack of parking,” said Charles Anderson.

“Our studies have shown that there are thousands of existing depots, ports, repair shops, shopping malls, and existing truck-related real estate that could be perfectly repurposed into small parking areas,” he added.

Freightsafe offers a modular parking solution at existing properties – such as depots, repair centres, warehouses, ports and truck stops – where drivers can safely park, store, swap and charge their trucks.

IRU position on the revision of the EU Driving Licence Directive

Finally, in November, given the upcoming revision of the EU Driving Licence Directive scheduled to begin in early 2023, IRU put forward a full set of proposals to revise the directive and reduce driver shortages in the EU, including by reducing the gap between school and wheel.

By endorsing the industry’s proposals during the revision, it is expected that the current share of young drivers below 25 years (6% for freight and 5% for passenger) would increase to 10% by 2030, placing the road transport industry on a solid, long-term rejuvenation path. The industry is also aiming to increase the share of women drivers to 10%.

Professional drivers from 23 countries awarded for their excellence

Driver shortages: navigating your way through

COP 27: Road transport committed to decarbonisation, but can’t do it alone
Share