The war in Ukraine has shifted surrounding transport routes. Member states of the Black Sea Economic Cooperation (BSEC) are now playing an even bigger role in the region. Investment in both hard and soft solutions are needed to keep up with increasing traffic at already congested border crossings.

The Balkan and Black Sea region has always been at the crossroads of trade. At the moment, it’s under immense pressure, as the whole region remains affected by the situation in Ukraine.

Regional bodies, policymakers and business leaders came together this week at the Balkans and Black Sea Forum, an economic platform, to discuss challenges facing transport and trade in the region. 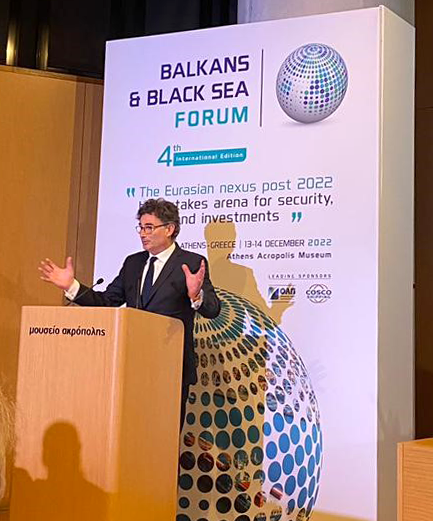 IRU Secretary General Umberto de Pretto, who spoke at the forum, said, “Countries such as Turkey, Greece, Georgia, Bulgaria and Azerbaijan have filled the void. Their efforts and commitment cannot be overstated. Just via Turkey, transit transport increased by nearly 50% in the first six months of 2022.

“But this is putting pressure on already congested borders and overstretched drivers and authorities. Drivers working in the Balkan and Black Sea region are facing long waiting times at borders – anywhere from 1-2 days up to 40-50 days depending on the season and border crossing point.

“Operators and drivers have stepped up, while governments have also contributed and increased border capacities. But, unfortunately, it’s not enough.”

“More investment is needed, in both hard and soft solutions. Border crossings with low capacity and insufficient infrastructure should be modernised immediately. And it should all be done in cooperation with neighbouring countries. Soft solutions should prioritise digitalisation. Global digital tools, such as eTIR and e-CMR, are available today and should be used,” he added.

However, while commending governments’ commitments to digitalisation, Umberto de Pretto highlighted that 70% of the Balkan countries and the majority of BSEC countries had not yet taken the first basic step of signing the e-CMR protocol.

IRU has also highlighted in the past that unnecessary and costly border procedures, such as repetitive customs controls, including x-ray scanning and weighing, and time-consuming procedures meant only to collect money, such as disinfecting trucks, should be removed.

“How can we have the audacity to speak about sustainable development goals when, in reality, our trucks, hence the economy, are blocked not for hours or days but in some cases for weeks? How is it that social equity is a pillar of sustainable development, yet it is not seen as a human tragedy that our drivers are effectively held hostage at borders with no choice but to wait, as long as it takes, often without basic facilities? And how can we, as the road transport industry, continually strive to reduce our CO2 emissions, while our trucks waste fuel inching ahead, ever so slowly, idling in seemingly never-ending queues? Solutions exist. The time has come for strong political will and action, not words,” concluded Umberto de Pretto.

From landlocked to landlinked: Uzbekistan at the heart of Eurasian trade