Vehicle automation. It’s not about the tech. It’s about the business

IRU global innovation lead, Zeljko Jeftic, gets down to business. If the business proposition works - the technology will take care of the rest. The trick is to digitalise processes in the meantime, so that the opportunities can be seized as soon as they are viable.

For anyone involved in road transport, the last few years have seen some of the biggest changes in our lifetimes.

The field of automation is accelerating and it seems that we are not only ready to have self-driving trucks transporting our goods, but drones and hyperloops are on the horizon, too. But there is a long way to go before we reach nirvana.

And with some 90% of all road traffic accidents being caused, at least partially, by human error, increasing levels of automation through advanced driver assistance systems (ADAS) or in fully autonomous vehicles need to be seen as a welcome complement.

While it may seem that vehicle automation is all new, this is not entirely so. The evolution of radars, cameras, lidars, computer processing power, machine learning and artificial intelligence is immense. Vehicle automation started decades ago but the first, major steps were made thanks to the Prometheus Programme, which developed self-driving vehicles since the late 1980s under the leadership of vehicle automation pioneer Ernst Dickmanns.

In the early stages, a van full of computers was needed to automate driving, but the equipment quickly shrunk and vehicles managed to demonstrate impressive drives, like a self-driving car journey from Munich in Germany to Odense in Denmark and back, covering 1758 km. 95% of that distance was done by autonomous driving. That was in 1995! Impressive, even by today’s standards. Still, showing what is technically possible is not the same as introducing the solutions to the market.

It is not the technology that dictates the introduction of new services. Rather, it is the opportunity to improve current operations and to capture new business that is the driving force.

And this is borne out by some current trends.

We saw this with Uber’s OTTO when they completed their first shipment of beer almost two years ago, and proclaimed it the first, real-world commercial use of autonomous trucking.

It drew a lot of attention but there was not much follow-up. More than two decades after Prometheus, this transport was not a huge technological achievement. However what was remarkable was that it challenged our thinking on the providers of transport services for the future.

Ultimately, Uber decided to cancel their developments of self-driving trucks and focus on self-driving cars. Still, there are a multitude of other companies from Silicon Valley to New Delhi, Europe to Asia who are working relentlessly on automating trucks.

A few of days ago, with much less media fuss than the OTTO announcement, something much bigger happened. Volvo Trucks launched its commercial autonomous transport solution working for Norwegian limestone mine Brønnøy Kalk AS. This solution will consist of six autonomous Volvo trucks, which will transport limestone on a five-kilometre stretch.

What is interesting is that this assignment is the first of many, where established truck manufacturers will offer their transport solutions directly to transport buyers, such as Brønnøy Kalk.

So, who are “transport operators” of the future?

Take a typical transport for a large shipper, say IKEA, P&G or Lufthansa. Today there are a number of transport companies bidding to cover transports between their hubs, terminals, and warehouses. This is typically a more predictable transport environment, with many fixed routes, known well in advance, with a lot of motorway driving.

By 2030 these and other shippers could have many “transport solution providers” bidding for the same transport contract. Who could they be?

Finally, and most likely, there may be consortia consisting of some of these and other stakeholders.

Should transport companies be afraid?

The trucking business is one of the most competitive industries. The vast majority of truck fleets are small. Taking USA as an example, 91% of fleets have six trucks or less. Competition has always been fierce in trucking and stakeholder roles will continue to evolve even in the future. Competition for performing different assignments/tasks/jobs is highly welcome, as long as all stakeholders follow the same rules and regulations. Constant evolution is a key to securing your place in business.

A great example of how companies can not only survive but can thrive by being adaptable is CTS Group in Netherlands. They started as freight forwarders, bought trucks and became a transport company. Through their cooperation with some 500 stakeholders across Europe, they became part of a distribution network and ultimately evolved into a distribution centre thanks to their highly automated warehouse. Each of these steps required a new business model. They transformed their role and multiplied their value-offering to their customers by four over the course of 23 years!

For some of the most repetitive trucking assignments such as driving in a mine or between two terminals it will be increasingly difficult to attract young drivers to perform these jobs. In these cases, automation will be most welcome to complement the transport needs.

Still, this work today is performed by transport operators who will need to look into the future and think about their value proposition to supply chains.

Just hiring drivers who can drive from A to B and back again will not be a recipe for long term survival, you will need to provide additional value to the supply chain.

The complexity of the majority of transport operations in the real world, as I was recently reminded by young transport operators and professionals from different regions, goes well beyond just steering, accelerating and stopping the truck. In transports of live animals, dangerous goods or oversized transports, for example, autonomous trucks will not be viable solution for the foreseeable future.

So what about the jobs?

Not really! In these days of driver shortage, when the industry has huge difficulty attracting new talent, we should not mourn a few “lost” truck driver jobs in a mine as these jobs have been some of the most monotonous you can find in the industry. Truck drivers that were transporting limestone until yesterday will be able to find more interesting trucking jobs elsewhere.

Volvo’s self-driving trucks in a mine environment is a welcome complement to the transport industry, releasing six highly skilled drivers for more complex trucking assignments.

Transport demand is forecasted to grow by 230% for freight transport from 2015 to 2050 (primarily in non-OECD countries), and the gradual introduction of automation will, in my personal view, not be able to compensate for that growth alongside the forecasted increase of driver shortages. Thus, truck drivers should not fear being without jobs in any foreseeable future.

Still, to look into different possible scenarios of vehicle automation introduction and their potential impact on truck driver jobs, I would recommend reading the ITF report on the topic.

In addition, as with other industries, automation does not necessarily replace humans, but rather complement the human element by taking care of the simple tasks that require consistency and accuracy, while allowing the human jobs to evolve into more complex tasks, that require emotional intelligence or imagination.

So how can transport operators survive and thrive in the future?

From a recently published IRU survey, we see that over three quarters (76%) of transport companies expect autonomous trucks to become a viable option within the next decade. But those same companies may be less able to predict how this will change their businesses and what they need to do now to prepare.

If you are a transport operator, you should focus today on digitalising processes and operations. Removing paper, removing manual planning, paper-based proof of delivery and other similar tasks from the logistics chain will enable businesses to optimise operations in the meantime and to be more competitive. And this is happening. As IRU data indicates, 65% of transport operators are planning to invest in new digital services in the near future and a recently published IRU digitalisation position outlines IRU’s work to make this happen.

Finally, transport operators need to stay ahead of the curve and follow the latest trends while debating the changes with front runners, both other forward looking transport companies but also vehicle manufacturers and service providers.

One opportunity will be at the IRU Logistics & Innovation event, which will take place later in 2019. This is especially important for the younger generation of transport professionals and leaders, who need to make sure that their companies can thrive in 10, 20 or even 30 years from now.

While nobody can predict the future exactly, we can be sure it will not be kind to those who do not adapt. 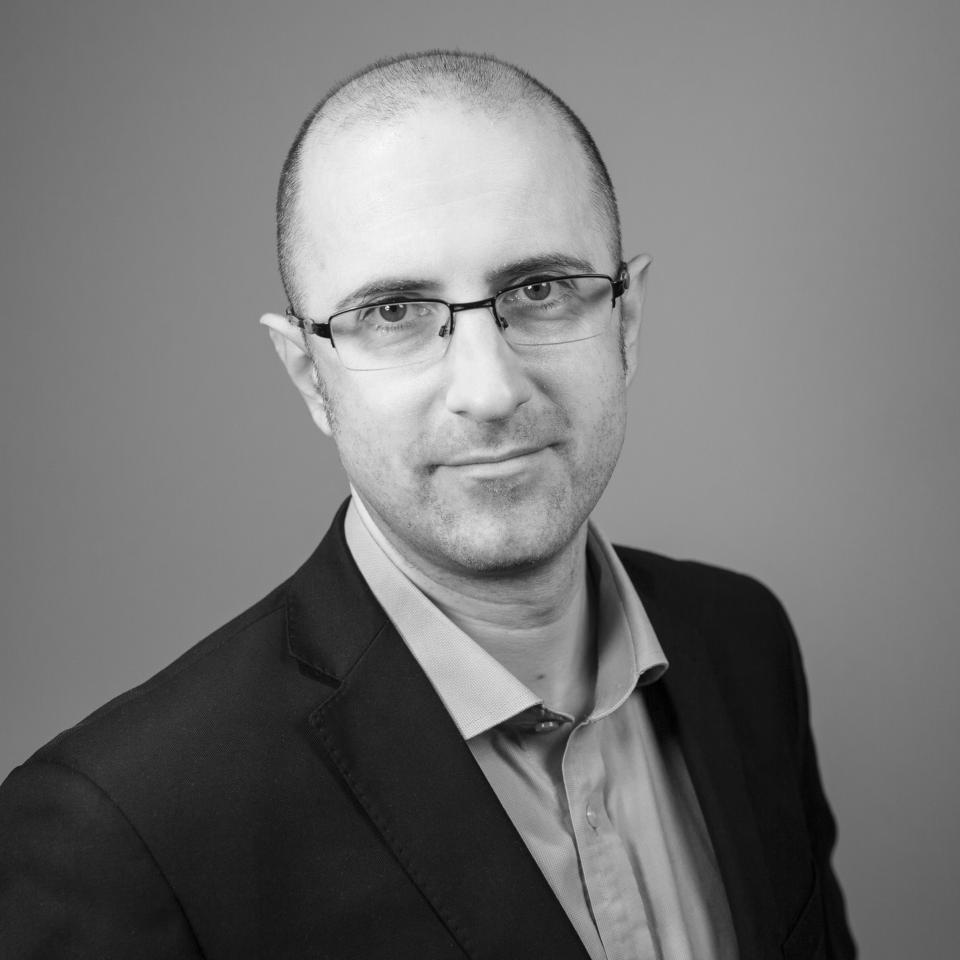 Zeljko Jeftic heads Global Innovation at IRU, leading the organisation’s engagement with its members and the wider industry on Innovation and Services. Zeljko has an engineering background with experience gained in telecommunications at Ericsson, and in the development of active road safety solutions (which today form the basis of the evolution of autonomous vehicles) at Volvo Group.

Zeljko then joined ERTICO – ITS Europe as Senior Project Manager on European R&D projects related to connected vehicles and cooperative vehicle-to-vehicle (V2V) and vehicle-to-infrastructure (V2I) services focusing on energy efficiency. In 2013, he joined IRU where he lead the establishment of the IRU Projects team, which is working on delivering solutions and knowledge for improved road transport through multiple private-public partnership initiatives.