Absatov Yerlan Sembekovich, Director of the Department of Economic Integration of the Ministry of Investments and Development of the Republic of Kazakhstan, talks to IRU.

Insight into trade with China, the impact of TIR implementation in China and Kazakhstan’s road transport and transit industry.

Can you give an overview of the transport industry in Kazakhstan?

"The fastest growing sector in Kazakhstan is transit."

Kazakhstan’s transport industry plays a major role in the development of the country’s economy. In 2016, for example, it accounted for around 7.8% of the country’s GDP. There was a 3.8% increase in the transport volume index in 2016, and an increase of 3.7% in the first five months of this year.

Results from the first five months of 2017 record that the total volume of freight carried by all forms of transport was 1.394 billion tonnes, an increase of 38 million tonnes against the same period for 2016, which is an increase of 2.8%.

What about trade prospects, border infrastructure and current links with China?

We see the development of Kazakhstan’s transit potential as a key driver in the growth of the transport industry. The rapid development of transit traffic on the Europe-China route is of particular significance. Situated right at the centre of international trade, Kazakhstan is a natural land bridge between these regions.

According to the LPI (the tool used by the World Bank to assess performance trends in the logistics environment) in the past two years Kazakhstan has increased its ranking in terms of the quality of infrastructure (by 41 places), efficiency of customs (by 35 places), ease of arranging international shipments (by 18 places), and ability to track and trace consignments (by 10 places).

The main transit routes for freight transported by road are from China to Europe, Asia and the Eurasian Economic Union. There is a steady upward trend on these routes.

“There are currently more than 300 Kazakhstan transport companies providing freight services from China to Kazakhstan and to third countries.”

Cooperation between the Republic of Kazakhstan and the People’s Republic of China (PRC) in road transport goes back to 1992, and on 12 October 2016, a Memorandum was signed between Kazakhstan and China to create a system of permits for international road transport. The Memorandum provides full regulation of passenger and freight traffic between the two parties on a mutually beneficial basis.

There is also the Agreement between the governments of the member states of the Shanghai Cooperation Organization (SCO), signed on 12 September 2014. The purpose is to develop international road traffic between the members of the SCO – Kazakhstan, China, Kyrgyz Republic, Russia, Tajikistan and Uzbekistan – and to establish a mutually beneficial transport market.

Under the Agreement, road freight transport can travel along agreed routes between SCO countries on the basis of a quota-based permit system. The Agreement identifies 6 routes, 4 of which pass through Kazakhstan. These routes are scheduled to open no later than 2020. Once the Agreement comes into effect, transport operators will be able to ship freight via the approved routes, including from Eastern China, specifically from the port of Lianyungang, to Western Europe.

“Cooperation between the Republic of Kazakhstan and the People’s Republic of China in road transport goes back to 1992.”

The Eurasian Economic Union's transport policy is to create equitable and equal conditions for the provision of transport services, establishing a level playing-field for opportunities to develop transport between member states by harmonising legislation and integrating transport strategies. The corresponding action plans for implementing the transport policy will be developed by 31 December 2017. The result will be the removal of existing restrictions for freight movements by all types of transport within the Union by 2025.

Can you tell us about TIR in Kazakhstan?

In 1995 Kazakhstan acceded to the TIR Convention which is founded on two key principles – to facilitate and to secure.

The Convention is a tool for simplifying the border crossing process, allowing goods to be transported across international borders to their destination as easily and quickly as possible. This is achieved thanks to a single procedure used in all member countries, and a single standard document (the TIR carnet), by removing inspections at the border, and by having a recognised international guarantee covering payments and charges from point of departure to destination.

It also provides the necessary security for customs authorities, while not adversely affecting their function with regard to national trade of providing protection against the illegal import or export of goods.

“In 1995 Kazakhstan acceded to the TIR Convention which is founded on two key principles – to facilitate and to secure.”

When processing a shipment being made using a TIR carnet, a border official can rely on the inspection carried out by his or her customs colleagues at the point of departure, that is, he or she can be confident that all the necessary checks were carried out when the goods were shipped, that the goods are in a secure load compartment, that the carrier shipping the consignment has been properly checked, and that each consignment is covered by a guarantee.

What do you see as the consequences of China’s Belt and Road initiative for Kazakhstan?

The Khorgos-Eastern Gate SEZ project is providing a powerful stimulus to the development of Kazakhstan’s transit potential, and will enable the New Silk Road Economic Belt to be established in its entirety.

All the border crossing points between Kazakhstan and China are currently operational, the most popular being Khorgos. Also, all the infrastructure for the Dry Port in the Khorgos-Eastern Gate Special Economic Zone (SEZ) is already in place.

As part of the Nurly Zhol programme, the Khorgos-Eastern Gate SEZ project is providing a powerful stimulus to the development of Kazakhstan’s transit potential, and will enable the New Silk Road Economic Belt to be established in its entirety.

President Nursultan Nazarbaev, gave the go-ahead for the construction of the Khorgos-Eastern Gate SEZ Dry Port in July 2014, and the first transport from China to the countries of Central Asia was processed as early as July 2015. The main purpose of the Dry Port is to develop and strengthen rail and road transport links along most routes in Central Asia, Europe and China, using state-of-the-art technology and the latest equipment.

The introduction of TIR has enabled transport operators in Kazakhstan to move freight between TIR Convention member countries easily and securely, and has simplified customs procedures at borders.

The implementation of the TIR system in the People’s Republic of China can therefore be expected to significantly shorten and simplify the transit procedure for goods at the border crossing points between our countries, and enable them to become more closely integrated into international transport flows. 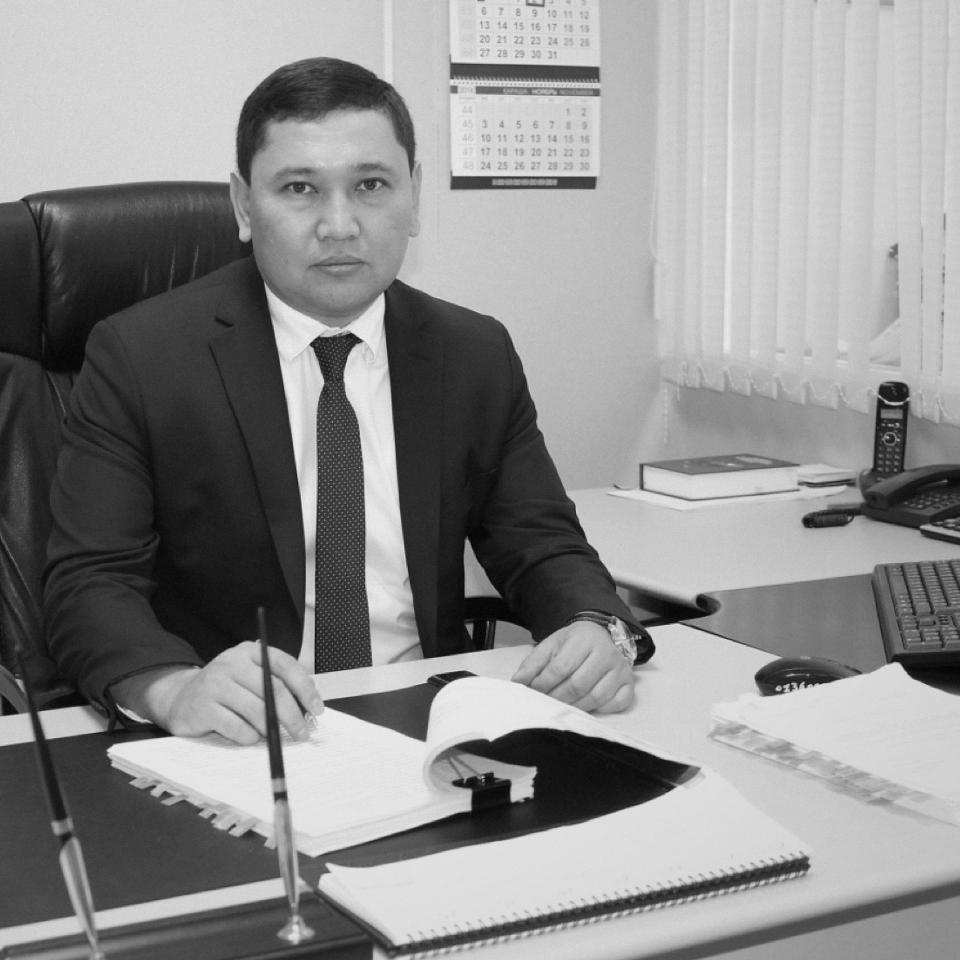 “The implementation of TIR in the People’s Republic of China can be expected to significantly shorten and simplify the transit procedure for goods at the border crossing points between our countries, and enable them to become more closely integrated into international transport flows.”

With a decade of experience in road transport, Absatov Yerlan Sembekovich is currently a key government representative for trade and transport. In his work at the Ministry, he is responsible for economic integration and development, customs regulation, trade, access to international markets and cooperation with EEA member countries – among other areas. 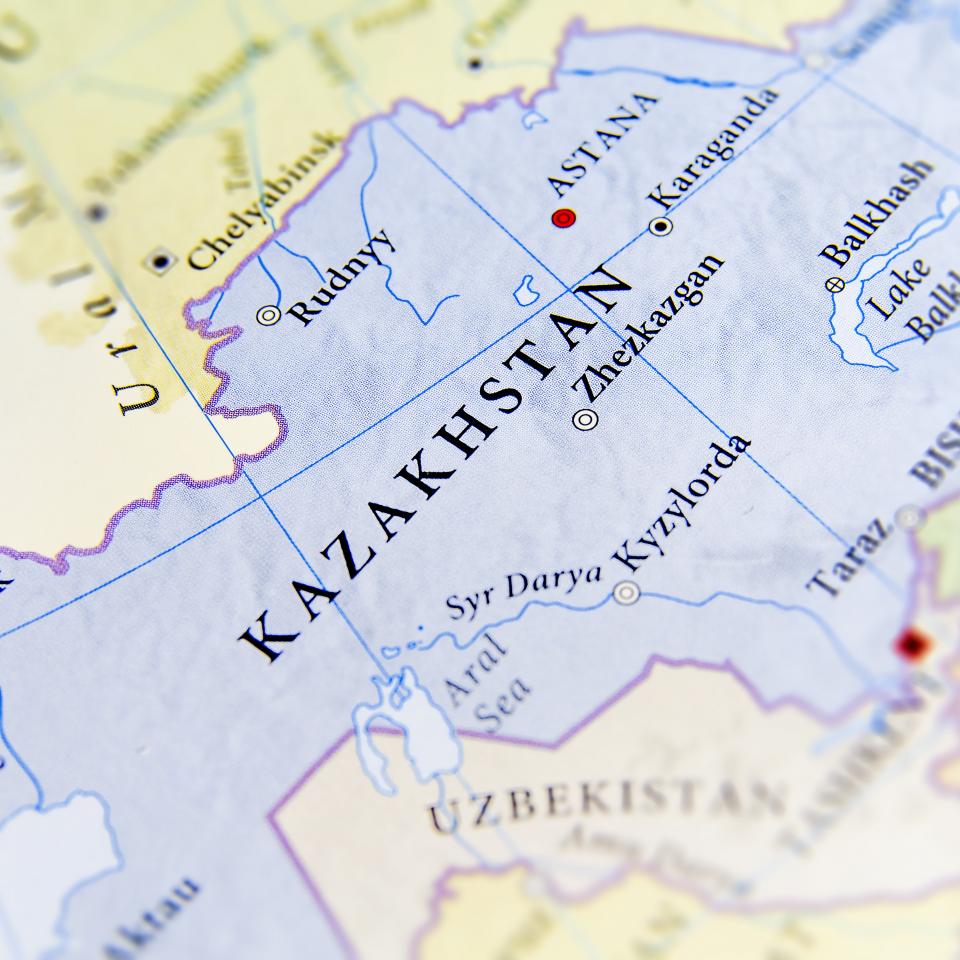 KAZAKHSTAN shares borders with Russia, China, Kyrgyzstan, Uzbekistan, and Turkmenistan, and also adjoins a large part of the Caspian Sea. The terrain of Kazakhstan includes flatlands, steppe, taiga, rock canyons, hills, deltas, snow-capped mountains, and deserts. Its capital city is Astana, while Almaty – its largest city – is a longstanding trading hub for the region.

The world's largest landlocked country, and also the ninth largest, Kazakhstan is economically the dominant nation of Central Asia, generating 60% of the region's GDP, primarily through its oil and gas industry.

It shares 1782.75 km borders with China, with seven fully operational border crossing points. China is Kazakhstan’s biggest trade partner, and there are currently more than 300 transport companies providing freight services from China to Kazakhstan and to third countries.

In the first 5 months of this year, the volume of transit shipments was 1.07 million tonnes, which is double (570 thousand tonnes more than the same period during 2016). Kazakhstan issued 20,509 TIR carnets in 2016.