While digital transport documents, such as e-CMR, hold the promise of improving efficiency of logistics chains, they are also becoming a key element in improving road safety.

The I_HeERO project is coming to a close after three intense years of working on the theoretical and practical implementation of the eCall system to heavy goods vehicles (HGVs), long distance buses and coaches. The project concluded that, when vehicles transporting dangerous goods are involved in an accident, information on transported cargo is relevant to the emergency responders in order to make efficient decisions when dispatching actions. IRU proposed the electronic consignment note (e-CMR) as the best means to transfer the information on transported cargo to the emergency responders. The use of a single data format will clearly facilitate the adoption of eCall for HGVs and may become a standard.

The solutions were showcased during the I_HeERO demo-tour organised by IRU throughout October 2017 in various locations in Europe.

“We are pleased to see that many stakeholders confirmed the need to implement eCall in HGVs. It was well acknowledged by rescue services, road authorities and transport operators that the implementation of eCall in HGVs has a high potential to save lives. Official recognition and adoption of the e-CMR protocol can thus substantially facilitate the deployment and increase the benefits of eCall for HGVs. The I_HeERO project is an example of an EU-funded project that has successfully bridged the fields of logistics efficiency and road safety.” said Gorazd Marinic, IRU Projects Manager and contact for the I_HeERO project at IRU.

Accident Emergency Call Systems (eCall) is an emergency call (the 112) generated either manually by the occupant of the vehicle or automatically through the activation of in-vehicle sensors following a collision. When activated, the eCall system establishes a voice connection directly with the relevant Public Safety Answering Point (PSAP), providing automatically a minimum set of data (MSD) such as the location and other vehicle data. The eCall service uses the common European standards defined by ETSI and CEN.

The need for efficient enforcement during deconfinement 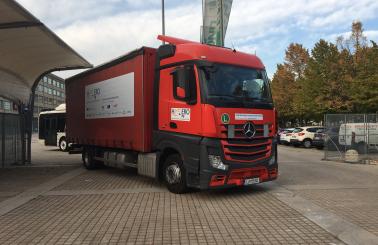