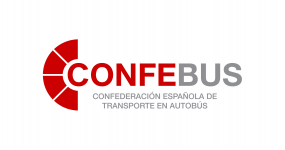 CONFEBUS is the Spanish Confederation of Transport by Bus & Coach, an organisation that represents and defends the interests of the Spanish bus & coach undertakings providing a wide range of services (regular, urban, occasional, school, tourism, management of terminals, etc).

The Spanish bus & coach transport industry has a turnover of more than 3,500 M € per year, employs around 70,000 people directly, with a total of almost 3,400 companies and more than 42,000 vehicles that annually transport 1,750 million passengers -1 out of 2 intercity trips in Spain are done by buses and coaches-, with a network beyond 75,000 kilometres, and which regularly communicates more than 8,000 population areas throughout the entire Spanish geography.